I saw this pattern on pinterest awhile ago and wanted to make a cute blanket for spawn #2. Since we don't know what we're having yet I wanted it to be gender neutral, although I confess, even after adding green to the border it's still pretty girly.

I made the blanket a lot smaller than it was originally supposed to be, but oh well, it's for an infant.  My daughter never really used the blankets I made her before she was born and who am I kidding, I wanted to try a new crochet pattern.

The way the pattern is written is very confusing at first, but once you get the hang of it it's not so bad. Because I would always fall asleep around 9pm it did take me a while to finish but, it's done! 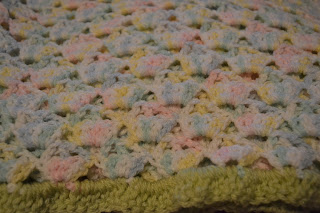 It's hard to see because of how I took the photo but every 2 rows makes up some cupcakes. I really enjoyed it and am trying to think of other ways to use the cupcake motif in a pattern. 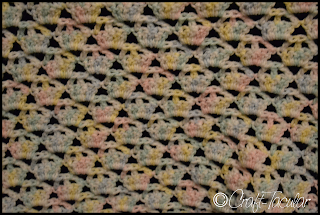