So here's the turtle that I made with One and Two Company's pattern!

I LOVE how he came out, the instructions were easy to follow and I've started another one of her patterns already. 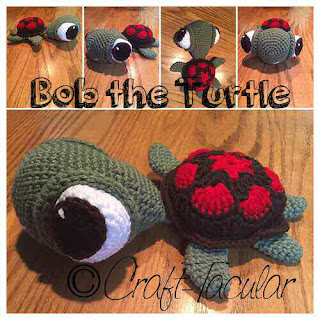 Although his name was Bob, he was renamed Bubble Butt after a rescue turtle and he is very happy in his new home.

I've been meaning to write about this for awhile. When I ventured out past the world of scarves and blankets I was starting to look at more and more patterns. Before Pinterest came along, I depended mostly on Ravelry (and still do) when I'm looking for a pattern.

Without fail, every time I was searching for an idea, the first thing I would do was check off that little box next to "Free" there was no way I was paying for a pattern. I no longer do this and I'll tell you why. Pattern writing is not easy. For anyone that's attempted it, it can be daunting and there are a lot of little parts that go into it. And while it's not the case every time, there's a reason why some patterns are paid and some are free.

For a pattern to be a "good" pattern it needs to meet certain criteria.
1. Write out all special stitches, notes, and materials needed.
2. Stitch count at the end of each row (very important!!!)
3. Clear, well thought out instructions.

Sometimes when you're doing a stitch or pattern you've done forever it doesn't occur to you that someone looking at it with fresh eyes might have a hard time with it, it's best to spell everything out as clearly as possible.

This isn't to say that there shouldn't be free patterns or that all free patterns are crappy, of course not. But what I'm getting at here is don't write a pattern off because it's not free. If it's for a project you're making for a customer you will more than make your money back. And even if it's for a gift, in my opinion I'd rather pay for a pattern and come out with a finished project I love than something that doesn't look as nice but the pattern was free.
Of course, I do realize that not everyone can afford to pay for patterns and I know that there are TONS of designers that do offer their designs for free. The lesson here is, they are both wonderful options and I'm so grateful to the designing community out there for sharing their creativity. I've only dabbled in the world of pattern making (mostly graphs) and it can be stressful so I truly appreciate all of the hard work, patience and time that goes into making them.

While I'm talking about Paid patterns I would like to shine a spotlight on one designer in particular- One & Two Company who saved me from project hell this week without even knowing it. (Which led me to write this post, lol) I was needing a pattern for a Sea Turtle. I searched Ravelry, Etsy and Pinterest and kept seeing her pattern, I favorited and kept going. Ultimately I chose a free one from Ravelry because, well, it was free and it looked easy enough. Wrong. After I completed the parts for the shell and joined them, the instructions for the rest of the shell were a disaster. No row counts, and the pattern in general was sloppily written and just not good. I decided to cut my losses and went back to my first choice Bob the Turtle. I absolutely ADORE this pattern. It is very well done, lots of illustrations, I would buy all of her patterns if I could afford them. Bob is going to be a birthday gift for a special little girl, so I will be sharing the finished project after he is in his forever home.

There is a sale going on right now on her site! (*I have not been asked or paid to share this information with you*)

Lesson learned for me. All patterns are not created equally and don't shy away from the paid ones, while they're not all perfect ( I know mine aren't but I do my best) give them a shot! You might be pleasantly surprised!

What do you think? Do you ever buy patterns? Do you have a pattern wish list like I do?