I tried making some letters for the new baby's room, and they came out cute, but look like there more for an older girl's room than for a nursery. So I decided to go in a different direction and start over.
The original letters were done with 8x8 canvases, some letters, buttons, ribbon and a shit ton of glitter! These match the chevron blanket that I made but overall the new letters go with the nursery much better.

Materials:
Letters from Jo-Ann Fabrics
Lion Brand Baby's First cotton yarn (bulky weight)
LOTS of glue from the glue gun
-patience. I recommend doing a test wrap without glue to figure out where you're going to put all of your yarn before starting. I had to re-do the "E" before I got it right.
Because I did ombre it was a little more time consuming, but I love the way they turned out! (This would also be a great project for a monogram!)
Applique sources are listed below the pictures.
My other piece of advice is this. Take your time! I stared at these things for weeks before I sat down to do them, I took some quiet time, put on some music and just did it.
I also took some paper and sectioned out the letters on where I wanted to change colors. You can barely see it in the top picture, but those were my very rough reference marks. it will make your life easier, just do it with something light and not a sharpie, you don't want your yarn to show through.

All done!! This was a super fun project and I'm very glad I got them done in time for the baby's arrival! 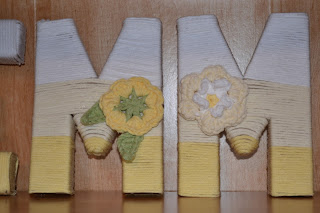 The M's were pretty tricky, but I figured out that if you cut small strips and lay them down in the glue it's much easier than trying to wrap around the triangle shape...that goes for the tops of the M too, once you do that you can glue down the fringe and just wrap over it so it looks seamless. Each letter poses it's own challenge but once you get the hang of it, it will go pretty quickly.

*I found the pattern for "hoots" as I've named him, I got it from this pattern on ravelry.
*Flower on the 2nd "M" is here - I modified the pattern a bit and did the same stitch repeat for the rose (sc, hdc, dc, hdc, sc) for each of the main petals instead of what the pattern called for.
*The rose is the same I used on my crochet flip flops and winter wreath posts.
* Flower on 1st "M" is here- I also modified this one and I only did one layer. I probably should've done more as I wanted to include more colors but I was exhausted and I liked how it looked after one round of petals.
Posted by ♥Tara at 9:12 PM No comments: 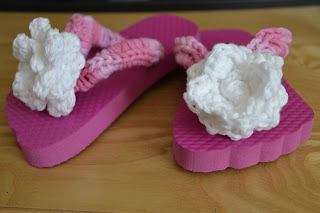 I've seen quite a few pins on Pinterest showing off crochet sandals and I decided that I would make a pair. I bought the flip flops at Michael's for $1.00 and had all of the yarn on hand.

Basically all you're doing is creating a SC (single crochet) around the strap. 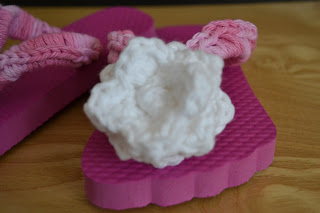 Start as close to the base of the sandal as you can!
-make your slipknot around the strap, leave yourself a 4" or so tail so you can weave it in.
-insert your hook under the strap, yo.
-bring your hook up, yo and pull through.
do this all the way around (even the toe part) and when you get to the other end, leave another small tail slip stitch and thread yarn through a tapestry needle.
-bring the yarn up through the inside of the strap, pull tight and cut yarn. smooth it into the strap so it's invisible.


For the rose I used the same pattern from the winter wreath and attached it with the tapestry needle and hiding the yarn ends the same way.

This was a very quick and easy way to spruce up some cheap sandals. Give it a try!
Posted by ♥Tara at 5:36 PM No comments: